The Story of Esther

After 12 years living with essential tremor, Esther Doyle’s condition worsened. The active 73-year-old was no longer able to do many things by herself. She had moved back to the US from Israel to help her family but had to give up helping to care for her two grandchildren.

Essential tremor causes uncontrollable shaking of one or both hands and may also affect the head, voice, torso and legs. For some, the shaking is constant and debilitating, interfering with everyday activities. Medications are typically prescribed to treat essential tremor but they can be ineffective or may have unwanted side effects.

“I became antisocial. What bothered me the most was going out and seeing my grandkids trying not to look at my hands shaking when I tried to eat with a fork. My doctor told me that I need to learn to live with it. There was no way I was going to live with this.”

The prescribed medications did not help improve Esther’s tremor, so she began researching treatments and found out about MR-guided Focused Ultrasound. Two hospitals in Southern California were performing the treatment, and Orange Coast Medical Center was the closest – an almost two-hour drive from Esther’s home. 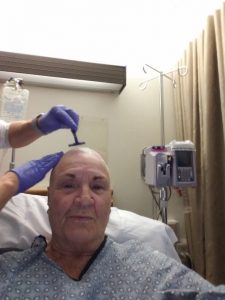 Esther contacted the office of Devin K. Binder, M.D., Ph.D., neurosurgeon at Orange Coast Medical Center, for a consultation. With over 20 years of experience treating patients with movement disorders, Dr. Binder has performed over 500 deep brain stimulation (DBS) surgeries – a procedure in which electrodes are implanted into the brain and a generator is implanted in the chest. He was now also offering the incision-free Focused Ultrasound treatment for essential tremor patients.

“Yes, you must have your head shaved, so not to interfere with the ultrasound waves. One of the two nurses shaving my head was so sad, saying that my hair was so beautiful. I had no problem – I knew that it would grow back.”

The physician also explained to Esther that like any medical procedure, there were potential side effects, such as problems with balance, walking or tingling in the lips or fingers. Esther understood, but focused on the potential benefit.

“The patient is awake and actively participating in their treatment,” says Devin K. Binder, M.D., Ph.D., neurosurgeon at Orange Coast Medical Center. “Before the procedure, we evaluate the severity of their tremor through simple tasks, such as handwriting, holding a cup, or drawing spiral diagrams. We have them repeat these tests periodically and continue with the procedure until their tremor has been suppressed.”

On November 3, 2020, Esther was the first patient to be treated with Focused Ultrasound by Dr. Binder at Orange Coast Medical Center.

Esther’s son came with her, and after the procedure, they went out for lunch on the beach. “My son walked around the restaurant telling everyone that I just had brain surgery. No one could believe that I was sitting having lunch right after brain surgery.” The treating physician had explained to Esther the potential side effects, but she reported that she did not experience them.

“I am not easily impressed, a pretty tough woman. After the treatment, I started crying with about 20 people around me. My doc said to me that maybe I am not so tough after all. The difference in my dominant right hand is unbelievable.” 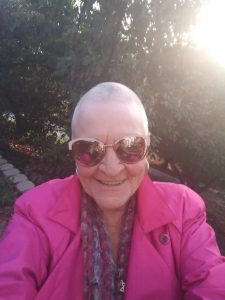 “Tremor reduction is immediate and often life-changing with this procedure. Patients are able to regain their independence, which improves the quality of their life,” says Theresa Stern, M.P.T., director of the MemorialCare Neuroscience Institute at Orange Coast Medical Center.

“My whole attitude towards life has changed since the procedure. I am ready to take on the world. I am walking 10,000 steps a day and going out for dinner with my friends. I let my hair grow back and have been experimenting with different colors. Here it is pink. Life is great.”

This patient testimonial may not be representative of all treatment outcomes.

You should have a detailed conversation with your physician regarding the risks and benefits of treatment options prior to treatment. The most common complications reported by subjects in Insightec-sponsored clinical studies after treatment included: imbalance/gait disturbance, numbness/tingling, and headache/head pain. Additional infrequent events include dizziness, taste disturbance, slurred speech, fatigue and vomiting. Persistent complications at three-years included: imbalance, unsteadiness, gait disturbance, musculoskeletal weakness and numbness/tingling.