Today I attended a celebration to mark the 100th patient to be treated at Rambam Hospital in Haifa, Israel using Focused Ultrasound surgery for essential tremor or tremor from tremor-dominant Parkinson‘s disease.

The event was hosted by the Israeli company INSIGHTEC, which developed and manufactures the medical device used to perform the incisionless surgery, and which is in use in over 60 centres worldwide.

This ground-breaking procedure is able to create a tiny lesion or burn deep in the brain in the area of the VIM nucleus in the thalamus. All of this is accomplished without any incisions or implanted equipment in the brain with a fully conscious patient. During the surgery, sound waves heat the target tissue in the patient’s brain, and testing is performed as the patient draws spirals and attempts to hold a cup steady. Once these tests show reduction of the tremor and minimization of any unwanted effects, the target is heated to nearly 60 degrees centigrade to create a permanent lesion. At the conclusion of the procedure, which usually takes approximately 3 to 4 hours, the patient is then able to get up, with their tremor often greatly improved. 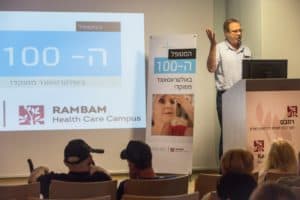 Two patients who were treated at Rambam over the last 5 years, the first and the 100th, spoke movingly about their experiences with focused ultrasound and the benefits that they feel have changed their lives. All 50 patients in the room were full of emotion and full of gratitude for the amazing innovation that is focused ultrasound surgery.

Dr. Marius Constantinescu, the neurosurgeon at Rambam Hospital, and Dr. Ilana Schlesinger, the neurologist, both spoke about the incisionless surgery in detail and how the advent of computers and MRI have transformed modern neurosurgery.

I used to be a Dental Surgeon and, early in my career, I developed essential tremor. I took the standard medication, a beta blocker, for 10 years and eventually as the dose increased, I couldn’t tolerate the side effects. I also briefly tried anti-seizure medication which I couldn’t tolerate at all.
I had to retire from dentistry, and I stopped taking all medications for my tremor.

I was offered Deep Brain Stimulation but I rejected it on the grounds of how invasive and risky it was. I hoped that someone would invent a non-invasive way of carrying out a thalamotomy, a standard invasive surgery for treating tremors.

Then one day, I watched a TED talk given by Yoav Medan from the Technion. Over many years, he developed an algorithm to enable ultrasound waves to safely penetrate the skull and burn only the target deep in the brain. I told my neurologist in London about it, and he wanted to raise money to buy the Exablate Neuro equipment from INSIGHTEC..

I chose to have my treatment at Rambam because they have so much experience with the procedure and I live nearby.

The surgery itself took 5 hours and was uncomfortable and at times painful. However, I kept thinking about the outcome of a tremor free life and I did manage to get through it. For the first month after the treatment, I suffered from dizziness, but that went away.

Now after one year, I can eat, drink, write, shave, brush my teeth and many other things I couldn’t do before the surgery.

I am proud to be one of the first 100 patients at Rambam who were brave and had this revolutionary treatment using sound waves.

Disclaimer: This testimonial may not be representative of all patient outcomes. For Neuravive safety information visit our website.