Gary’s Story: A signature, a spiral, a life changed

When I reached out to Gary, he was recoating the deck at his home in Oregon. This is just one of the projects he would have struggled to do until his recent focused ultrasound treatment for essential tremor. 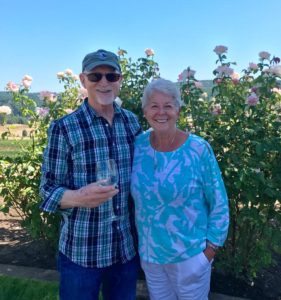 “I refer to it as life changing. I can sign my name. I can write. Hold a stemmed wine glass. Eat soup with a spoon. I look forward to getting back to my acrylic and oil painting again,” commented Gary.

For almost 15 years, Gary has been living with essential tremor. When he first noticed it, he was still working at the Sherwin Williams Company. “I was signing my name, and I looked at it and said, What is going on here? That is not my signature.”

Gary’s sister also has essential tremor, slightly more severe than his. He accompanied her for a consultation on DBS to hear about the treatment. While this was the treatment option that she pursued, Gary wanted a treatment that was “one and done.” He started researching more deeply into focused ultrasound.

“I watched the videos, which is kind of like being able to talk with a person who has had it. I knew what I saw on the Internet and what my neurologist shared and decided to go ahead and do the focused ultrasound treatment.” After having a CT scan, it was confirmed that Gary was a candidate.

During the 3 hour treatment, someone from the team would go out to the waiting room to let his wife, Susan know how it was going. “It was a very nice thing – they brought pictures of my spirals so that she could see how I was improving during the treatment. The Nurse Practitioner was with me throughout the procedure, holding my hand, which was very comforting”.

After the focused ultrasound treatment, Gary explains that he had immediate improvement in his hand tremor. He has experienced a lack of energy and some muscle weakness, which are now improving. These were potential side effects that had been explained to him.

What was the next thing that he did? He sent messages to his son, granddaughter, and friends, attaching the spirals from the treatment, so they too could experience the improvement in his hand tremor. Then he hand scripted a letter to his sister; something he had not been able to do for years.

At a recent treatment follow-up visit, he arrived early for his appointment. “When the nurse saw that I was there, she asked if I wouldn’t mind talking with a gentleman about focused ultrasound. I agreed, and it was a nice opportunity to share my experience with the treatment with someone who is considering it.”

Gary plans to have his wine in a long-stem glass at his next visit to the local winery to savor the wine in his steady hand.

This testimonial may not be representative of all treatment outcomes.  For additional information about focused ultrasound for essential tremor, including safety information, please click here.