For John, this portrait he painted is so much more than paint on canvas

John is an artist. He has been for his entire life. It’s part of his identity. What would you do if what makes you uniquely you was being taken away from you?

John’s story follows him from his art school years in Massachusetts to his work as a designer in Rhode Island, illustrating for large advertising agencies and then his own studio in in Boston, MA, and Providence R.I., a couple of stints in California, and finally to Florida.

When you speak with John, you realize he is a people person. He likes to talk about his art and his harmonicas – and he has many of them. His progressing Essential Tremor does not stop him from playing blues harmonica as he can support the harmonica with both hands. But his art, that is a different story.

The shaking of his hand when he attempts to bring the brush to the canvas was not part of the plan. “Painting is my life, my passion,” John adds. He was losing his ability to paint and recalls with sadness that there was an entire year that he didn’t paint at all.

John took several prescribed medications for his Essential Tremor over a twenty-year period with varying degrees of tremor control and side effects. He stopped taking them when they did not help anymore. John had difficulty seeing his future life with the shaking getting progressively worse and worse.

While his art education was traditional, he has pursued learning other media including etching and sculpture. Today, he mostly does oil paintings – landscapes, still life, and portraits. 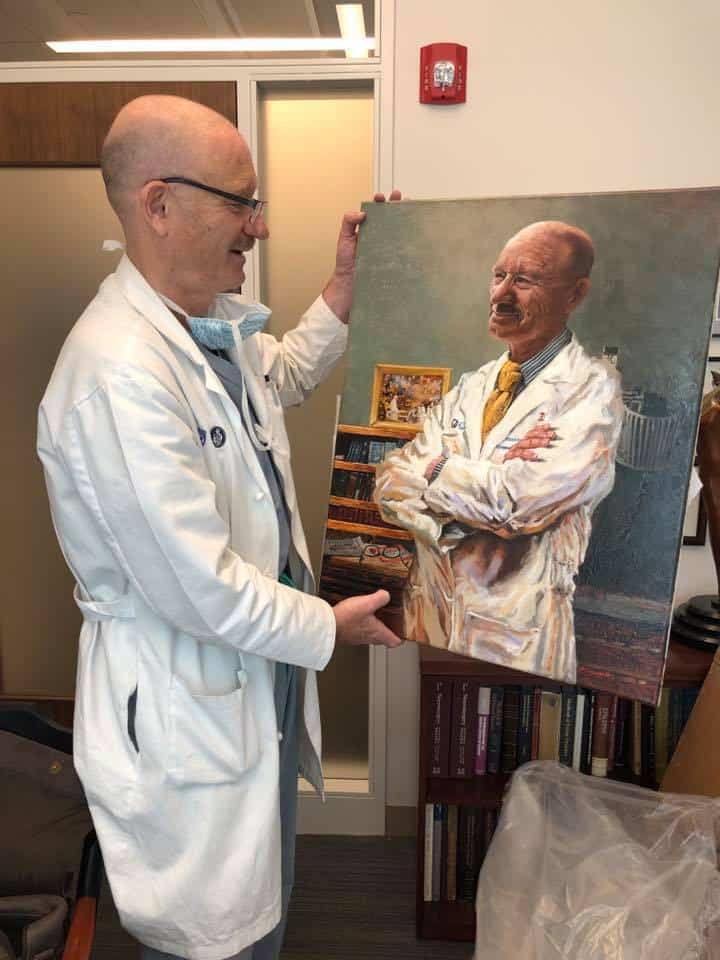 A portrait is what sparked this interview. John recently gave Dr. Garth Rees Cosgrove, Director of Epilepsy and Functional Neurosurgery at Brigham and Women’s Hospital in Boston, a portrait he painted. This is not just a portrait – it literally captures the essence of Dr Cosgrove. Dr. Cosgrove performed the Focused Ultrasound treatment for John’s Essential Tremor over one year ago.

The road to treatment was not a straight line for John, but one goal was always on the horizon – getting back to painting. He had read about Focused Ultrasound online, watched other people’s stories, and had tried to get into the clinical trial several years ago. Then he found out that he could go to a center that offers FUS in another state where there was Medicare coverage. Since he has ties in Boston, it seemed a good fit.

Overall, John was prepared for treatment day. While the hardest part was the local anesthetic to ease getting the frame attached to his head, he also recalls some intense pressure when the focused ultrasound was applied. In the days and weeks that followed his treatment, he was happy to have his life back and adds that there were side effects – numbness in his fingers and lips, loss of taste and some gait issues. He admits that he had trouble walking also prior to the treatment, although he feels that the numbness has improved over time.

Even with these side effects, John is happy because, “I paint every day.” John is glad that the treatment worked to improve the tremor on one side, and now he can put his energies into painting. One of those projects was Dr. Cosgrove’s portrait, and so many others await his fluid paintbrush strokes.

This testimonial may not be representative of all treatment outcomes. For additional information about focused ultrasound for essential tremor, including safety information, please click here.