By: The INSIGHTEC Marketing Team

Billy Williams always led an active, happy life defined by work, hobbies and family. After four years in the Air Force, Billy went to work at Western Union. After 28 years, he returned to his military roots and worked in the communications department of the Joint Chiefs of Staff at the Pentagon for more than a decade. In the midst of all those satisfying work years, Billy and his wife raised two children in Winchester, Vermont.

Billy’s essential tremor started about 12 years ago while he was still working at the Pentagon. The tremors affected his hands, though more in the right than the left. Since he’s right-handed, the tremors affected all of his activity, writing especially, but also eating and even teeing up a golf ball. He became increasingly less active and spent more time confined to the house, avoiding the activities he had always done. There came a time when he no longer attended the weekly church socials he had always enjoyed with his wife. He no longer played golf, the hobby he had pursued for more than 40 years. The symptoms progressed and hindered literally everything he tried to do.

As his symptoms worsened, Billy went to two different neurologists for information and treatment. Both times he was prescribed medications, which did nothing to alleviate his symptoms. With nothing helping, he grew increasingly depressed. Finally, he was referred to the University of Virginia (UVA) Neurosciences and Behavioral Health Center.

For the first time in years, he had hope. After performing several tests, the Neurosurgeon laid out three possible treatment options: medication, which he had already tried, deep brain stimulation, which involves drilling a hole in the skull and attaching sensors to the brain, what Billy calls, “not a very attractive option,” and a new treatment called MR-guided focused ultrasound that, at the time, was available only in a clinical trial and did not yet have FDA approval for use on patients.

“When we discussed all the options, I decided on focused ultrasound,” says Billy. “I liked what I heard and I was willing to wait to be the first-ever patient to undergo the revolutionary new approach to treating essential tremor.”

“I experienced no pain or difficulties whatsoever during the treatment,” Billy remembers. “The worst part was having my head shaved and holding still for the hours required, but I considered these a small price to pay to regain the use of my hand. They administered a handwriting test prior to treatment and then again during and after the procedure. The improvement was immediate. It was truly amazing.”

After an overnight stay in the hospital, it wasn’t just handwriting and everyday tasks that improved the next day. “The improvement in my attitude was apparent to everyone around me, especially my wife, who had lived through my decline in activity and zest for life,” says Billy.

A 1st for all in the MR Room – Looking Back with Eyal Zadicario, INSIGHTEC’s Chief Operating Officer & General Manager

Not surprisingly, it was an extremely emotional event for Billy and his wife. But not only for them. A small team from INSIGHTEC, the innovator of the focused ultrasound technology, was also there, experiencing the dramatic “first” alongside Billy. Eyal Zadicario, INSIGHTEC’s Chief Operating Officer & General Manager, remembers it like it was yesterday. “He was very brave and calm,” Eyal says about Billy. “He deserves a lot of credit for being the pioneer case. It was very humbling.” Immediately following the treatment, Eyal recalls Billy smiling and saying, “Look, my tremor is completely gone,” as he held up his hand. 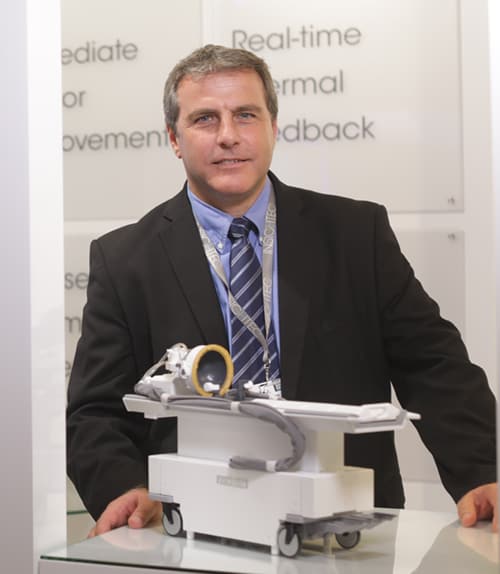 Everyone present was astounded by the immediacy of the results. “I don’t think any of us realized how disabling essential tremor can be,” explains Eyal. “So not only were we able to witness such dramatic and immediate tremor improvement, but we also realized for the first time the impact the treatment could have on so many lives. It was extraordinarily emotional.”

For Billy there were no side effects and no recovery time, just a new lease on life. “Today my wife and I are living full lives in Fort Valley, Virginia. I’m back on the golf course at least twice a week. I owe the life I have today to Neuravive; it’s life-changing.”

Disclaimer: This testimonial may not be representative of all patient outcomes. Click here for safety information.